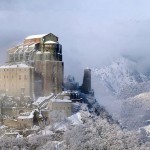 The Sacra di San Michele (English: Saint Michael’s Abbey) is  a religious complex on Mount Pirchiriano in northwestern Italy (the Piedmont region). It was originally a Benedictine abbey, but is now home to the Rosminian order. The building was built in the 10th century on the site of an old Roman fort, with the crypt being the oldest part. Most of the current building, however, dates from the 12th century. Like many churches and monasteries dedicated to St. Michael, it is located in a hard-to-reach place. The abbey is part of a pilgrimage route that runs from Monte Sant’Angelo in southern Italy to Mont Saint-Michel in Normandy, France. It is best known for inspiring Italian author Umberto Eco’s famous historical murder mystery novel The Name of the Rose.