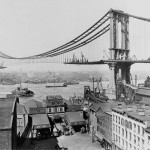 The Manhattan Bridge is a steel suspension bridge spanning the East River, a salt water tidal strait in New York City. This 2089 meter long bridge connects Lower Manhattan and Downtown Brooklyn. It served as a model for many other suspension bridges built in the first half of the 20th century. This photo was taken on 23 March 1909 and even though work on the bridge continued until 1912, it was opened for traffic already on 31 December 1909.