Thomas Jefferson, the third president of the United States, was born on this day in 1743.

He was a very versatile person. For example, John F. Kennedy jokingly said during a welcome speech at the White House`s dinner for Nobel Prize winners: “I think this is the most extraordinary collection of talent, of human knowledge, that has ever been gathered together at the White House, with the possible exception of when Thomas Jefferson dined alone.“

Thomas Jefferson was born in Shadwell, in the heart of the American colony of Virginia. He came from a wealthy landowning family. Black slaves cultivated their plantations. Namely, Jefferson inherited thousands of hectares of land, and he had a total of about 600 slaves during his life (since he was selling and buying them, he had about 130 slaves at any given time).

His main residence was called Monticello, which means “little hill” in the Italian language. Originally, it was an estate of about 2,000 hectares, located near Jefferson`s birthplace in Shadwell (Virginia). Jefferson built there a large mansion i.e. villa inspired by the Italian architecture. It is interesting that Monticello is the only private residence in the United States inscribed on the UNESCO World Heritage List. 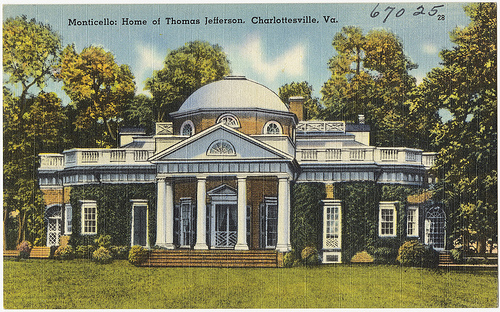 Interestingly, Thomas Jefferson is considered the inventor of the rotating chair. His last name Jefferson allegedly originates from the Norman name “Geoffrey”, which was quite common in the area of United Kingdom during Middle Ages (his ancestors later immigrated to America).