On this day in 1945 the British made their first attack on Germany using their strongest bomb. It was the so-called “Grand Slam” bomb of yet unseen dimensions and mass.

That bomb weighed as much as 10,000 kg and was filled with a special explosive called Torpex (50% more powerful than TNT by mass). The explosive was poured into a bomb in a hot molten state, which is why it took a month to cool down and harden.

“Grand Slam” bombs were constructed as so-called seismic or earthquake bombs. This means that they were designed to plunge deep into the ground and then explode, causing seismic waves that demolish buildings from below.

Apparently, the Grand Slam bomb could penetrate even 40 meters into the ground (it was thrown from the great height so it could reach near-supersonic speed). 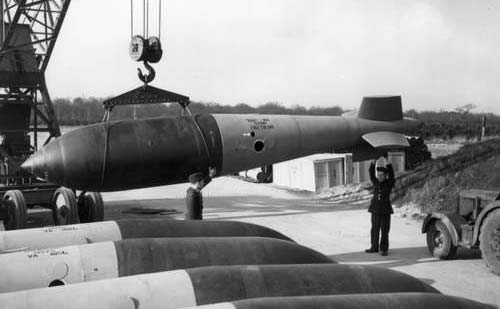 On this day the first Grand Slam bomb was thrown at a target on the ground. It was the Schildesche viaduct near the German city of Bielefeld. On this viaduct was the important Hamm–Minden Railway, which connected the industrial Ruhr with the north and east of Germany.

The “Grand Slam” bomb explosion was so strong that it collapsed almost 100 meters of viaduct (because of the earthquake effect). In total, the British dropped only 41 such bombs by the end of the war.